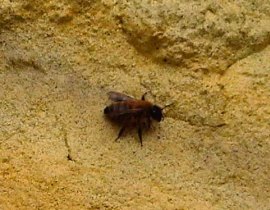 There are a number bee species which are commonly referred to as Masonry Bees. As their name implies these insects have a habit of building nests in old mortar, although solitary they usually appear in loose colonies - if a wall is good for one Bee, its good for others too. It is not only man made structures where Masonary bees construct their nests, they utilise almost any suitable hole . The name 'masonary bee' actually comes from the construction of the individual brood chambers out of mud.

Masonry bees are very active in May and are often mistaken for wasps due to some species appearence.