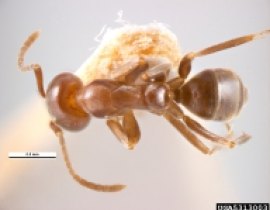 Argentine Ants Linepithema humile are a non-native 'tropical ant' species which only survives in the UK within the warmth of buildings.

They eat anything with individual colonies showing a preference for a particular food, normally something high in sugar but also taking meat. They are a difficult species to control due to their dynamic colonies and rapid reproduction rate.

If crushed the worker ants emit a musty greasey odour.