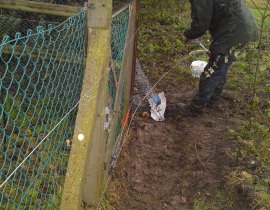 Wild rabbits are often under-rated as wildlife, they are fascinating creatures to watch. Living in colonies their characters and social interaction makes great viewing. But if you’re here reading this you probably care more about your garden or crops than rabbit social structures.

Rabbits cause a huge amount of damage to commercial crops each year, myxomotisis no longer can be relied on to crush numbers back down to manageable level each year. Estimates vary but it is generally accepted that the population as a whole in the UK increases by 4% per year.

If you have a problem with rabbits your first decision is whether you want them out for good or just to manage their numbers.

Proofing against rabbits with rabbit fencing is the long term solution. It will work out cost effective in the long run when you way it against the cost of employing someone to reduce numbers annually.

If rabbit fencing is not an option, either gassing or working ferrets are the best methods of controlling numbers. Shooting is initially effective but will not remove enough rabbits before they ‘wise’ up to the red light. Trapping can be effective but is labour intensive and may take some time to yield results, if at all.