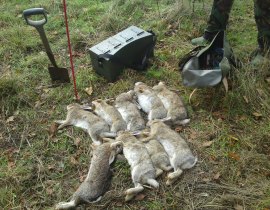 Ferrets are the domesticated version of the Polecat, a member of the mustelidae family which includes badgers, otters and weasels. It is there natural predatory skills and ability to hunt down rabbit warrens which makes these charming creatures such a resource in the field of pest control.

How do you catch rabbits with ferrets? Well, quite simply the ferrets do down the holes and rabbits come out, fast.

We like to work our ferrets with purse nets. Purse nets are placed over all the holes in a warren set and are pegged into place so that when the rabbit bolts it hits the net which purses up capturing the bunny for a humane dispatch or relocation.

On occasions the rabbit will run down a dead end in the warren and be trapped by the ferret which may kill it or sit and guard the animal. When this happens the spade comes out and the digging begins. The ferrets are fitted with a radio transmitter which allows us to follow their movements underground and locate them.

It is possible to work ferrets with long nets, over guns, with birds of prey and with dogs, however we prefer the purse nets for pest control.

The greatest benefit of working ferrets as opposed to gassing warrens is that unless the ferret catches something underground we only target rabbits. There are many other creatures which will use rabbit warrens for shelter, these can be Little Owls, Cats, Foxes, Badgers, snakes to name the most common. Most experienced ferreters will have a story or two about what they have accidently caught in a net when out ferreting, if gassing had been used then everything down the hole would have been killed.

Gassing also carries some risks, the gas itself is highly potent and will kill anything unfortunate enough to breath in enough fumes, this could even be a ramblers dog scrapping at the filled in rabbit hole after a treatment.

Working ferrets does have some restrictions; we must be able to get to all the holes otherwise it will be sods law that the rabbits will all choose the only hole not netted to make their escape. Ferreting also has a season, it is a futile exercise to work the ferrets once the rabbits begin their breeding in spring. The ferrets will inevitably find the young rabbits underground, make a kill and feed, then curl up and fall asleep and require digging out. At six feet deep this can be a labourous event.

We provide ferreting services through-out Suffolk and have approved partners in many other areas who can provide this traditional method of pest control.