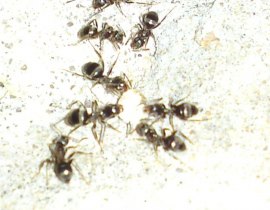 Lasius niger the Black Garden Ant is the most common ant here in the Uk. They are often found foraging around our gardens and patios, and all too often coming into our homes looking for tasty treats.

There is a common misconception that 'flying ants' are a different species, these winged ants are merely the colonies fertile queens and males which leave the nest on mass (usually on a barmy day in summer) to take to the wing and reproduce.