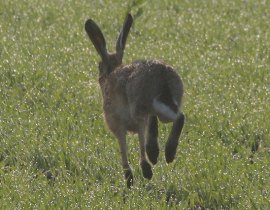 Brown Hares Lepus europaeus are the larger cousins of the Rabbit. Whereas rabbits enjoy a good warren, Hares stay above ground all their lives. To live without the security of a warren the Hare became fast, running upto 45 mph fleeing predators.

In Early spring you may be lucky enough to see the 'Mad March Hares'. The apparent boxing match is between a doe and a buck, he wants to mate but shes not ready!