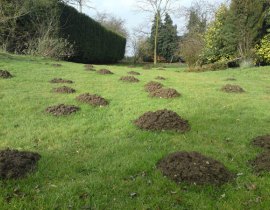 The obvious sign of the presence of Moles Talpa europaea in your garden is the dreaded mole hill. These earthworks are the excavated soil from the moles feeding tunnels (runs) and living accommodation. Occasionally (more often in areas of high water tables) an exceptionally large mole hill will occur – this ‘Mole Fortress’ is the location of the moles nest.